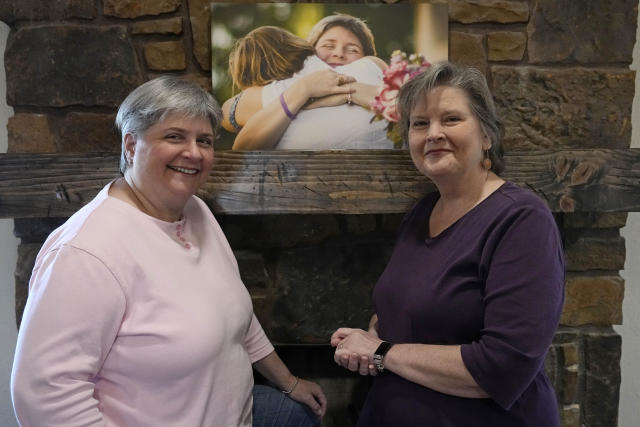 the right to wed in ‎Oklahoma .

same-sex couples’ constitutional right to marry, they no longer take their union for

recognition of same-sex and interracial marriages, they — like many in LGBTQ

“The very fact we’re even having these conversations is really disheartening to me,”

especially given a dramatic shift in public opinion over the past decade, with polls

But when the high court overturned Roe v. Wade, which had guaranteed abortion

rights, Justice Clarence Thomas suggested in a concurring opinion that the decision

upholding gay marriage should also be reconsidered. That prompted Democrats to

both chambers of Congress.

Read Also:Vietnam declares being gay or trans is ‘not an illness’ and cannot be cured or converted

Republicans; it’s expected to easily win approval in the House before being signed by

At first, Sharon Bishop-Baldwin said, she thought the act was “lip service.” But she

changed her mind because it would at least provide some protection.

place could suddenly be unmarried in another,” Bishop-Baldwin said.

When the couple filed their 2004 Oklahoma lawsuit, 76% of state voters had just

unconstitutional. A year later, the high court decided in another case that all states

had to issue marriage licenses to gay couples.

“When we won, one of our lawyers said, ‘This is game, set, match, marriage’ … and

that’s what we thought: We’re done,” said Bishop-Baldwin, who runs a small

newspaper and met her wife in 1995 when both were editors at the Tulsa World.

The legislation wouldn’t codify, or enshrine into law, the Supreme Court decision

requiring states to issue same-sex marriage licenses. But if that decision were

overturned and states revived bans, they still would have to recognize same-sex

marriages performed legally in other states.

“I can’t imagine that happening at the Supreme Court … but we have to be prepared,”

said Mary Bishop-Baldwin, 61, who notes that Oklahoma’s ban is still on the books.

That’s especially true for those with children, she said. Currently,

both spouses are considered legal parents, which is especially important if one of

them dies or they divorce.

“So this bill really does matter,” Pizer said.

Some also fear the high court or a future Congress could undo the federal legislation.

“Every time the House and Senate overturn, you’ll wonder what might happen this

time,” said Dawn Betts-Green, 43, who lives in Birmingham, Alabama, with her wife,

Anna Green, whom she married in Florida in 2016. “It’s honestly in the hands of

whoever we elect, and that is scary.”

long shot, but “it is certainly possible for there to be a series of events that really took

us back to that earlier time when it was incredibly difficult for families,” Pizer said.

“The idea of returning to those days, frankly, is terrifying,” she said.

Betts-Green and her wife hurried to complete paperwork, such as wills and powers of

attorney, after Roe v. Wade was overturned, getting “all of our legal ducks in a row

(because) they’re clearly coming for us,” she said, recalling a time when her wife was

would not be permitted to make medical decisions.